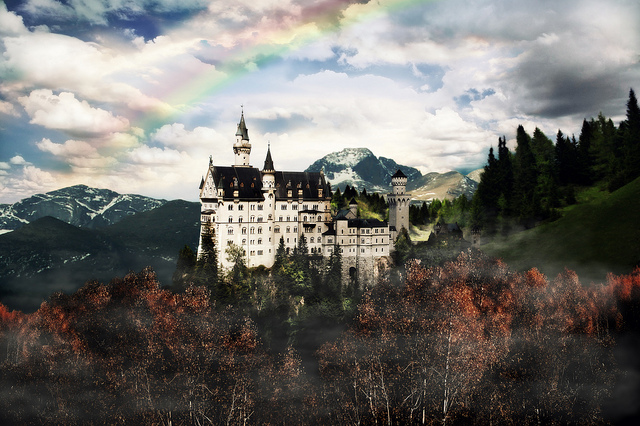 Once upon a time, on the shores of the pacific ocean, there was a magical kingdom called Powell. This kingdom was separated from the outside world by a great sorcery called BC Ferries, leaving the citizens free to live in peace and comfort.

But all was not well. The great arena, where the citizens liked to gather and mingle, had grown old and decrepit. For a time the town wardens sought to repair the structure, but in the end it was no use. With deep sorrow, they ordered it levelled by battering rams.

When those old walls came down, the whole kingdom turned out to see. That building had been like a beating heart in the community, built by the people for the people. Now there was a nothingness, a great blank spot in the fabric of the kingdom. The beach was still there, and it was beautiful, but the only structure that remained open was a hamburger stand.

“Fear not!” cried the wardens. “We have the power to build anew on this wonderful site. Only tell us what you would like to build, as we already have a new arena.”

Then all of the citizens began to speak at once.

“How about we build a BIGGER hamburger stand?”

“What about a gated community for our valued rich people?”

“Can we please make it into a beautiful parking lot?”

The town wardens looked at each other with some dismay, as these ideas did not fit the nature of the site. They were beginning to think that they should just leave well enough alone, when a small boy spoke up.

“Pardon me, sirs,” the boy said, “but couldn’t we move our library there?”

Some of the citizens were surprised. “What?! We have a library?”

“Oh yes,” said the boy. “We have a lovely little library in the catacombs below the town warden’s office. But they only have room for a few books, and the space is rather old and crummy. Kingdoms half our size have much better libraries.”

“Very well,” said the wardens, “we acknowledge that the library in our catacombs is too small for a kingdom such as ours. And library is a true public space, a building for the people. We will build this library.”

And so the troubles began.

By ancient custom, any decision made by the town wardens was immediately opposed. Not by everyone, mind you, but by enough people that the wardens should never feel at ease. This duty was passed from generation to generation, in a grim and serious order known only as the Naysayers. One of them stepped forward now.

“Stop at once!” she cried. “Our citizens do not have the gold you require to build this useless edifice to knowledge. The existing library is fine! Catacombs are a lovely place to keep books. And in fact, no one reads books any more. They all just read blogs on the Internet.”

One of the wardens turned to address her. “Madam, we are not asking for any of your gold today. Let us prepare a plan for the building, with all costs accounted for. There are grants and other treasures we may draw on. When we know how much gold is needed, only then can we ask for your approval.”

“Never!” cried another voice. “One cent would be too much. The craft mill may close, or a horrible plague may wipe out all our labourers. The future is bleak! We cannot afford to pay for trifles such as this, no matter how cheap.”

Now another lady stepped forward, and the crowd parted around her, for all could see from the square of her shoulders that she was a Librarian.

“This library is worth it! Knowledge is a commodity more precious than gold. It is with books that we became a wise and thoughtful people. And a library can be more than a bookshelf, don’t you see? It can restore this old site to the glory and wonder it once knew. There will be rooms for meeting and gathering, there will be fantastic art adorning the walls. Families and friends will gather inside, and the eager voices of children will ring through these walls once more — quietly, I hope.”

The Naysayers were horrified. “You cannot steal this beach from us!” one of them shouted. “How dare you replace a beach with a bloody book-bin!”

“We’re not,” said the Librarian. “The library isn’t going on the beach. In fact, it will use less than a quarter of this upper lot. The trails and forests will stay. You may find this hard to believe,” she continued sweetly, “but libraries take up less space than great arenas.”

Shouts of approval followed her remarks, mixed with a grim hissing from the Naysayers.

One of the wardens spoke up. “There is a simple way to solve this,” she said. Let us send horsemen throughout the land, and ask everyone to choose their preferred site. Whichever site has the most votes…”

“Other sites?” asked the Librarian. She was looking kind of sad.

“Oh yes, like the site near the Sheriff’s keep, by the old woods. All those woods will have to come down to make room, so we expect a lot of angry Naysayers. Or the unsuitable site inside a furniture store. Libraries have furniture, so it makes sense to some people. Building won’t work, of course. Makes for some great arguments!”

“Not only that,” said another smiling Naysayer, “but I’ll gladly disagree with any site anywhere, because books are evil.”

“Not gay,” said another one, “but useless to read when you could just watch the movie.”

“Not really,” said the first Naysayer, “but since I’m rich I don’t need to borrow things. And public spaces give me the creeps.”

“There are two good public spaces,” said an older Naysayer. “Public houses and public rest rooms. Can’t have one without the other, really.”

And a little voice shouted…

It was the young boy. While everyone was talking, he had built a small tower out of their soap boxes. He was balanced there now, lit from behind by the last rays of a beautiful sunset. They squinted up at him.

“Can’t you see that this arguing gets us nowhere? Bickering won’t help. Surveys won’t help. NOTHING will help until you all stop being so negative!”

This was such a daring proclamation that for a moment, no one said anything. The boy rushed ahead.

“Powell is a great place, an awesome place. We all care for it and love it very much. But our kingdom has grown old and our love has turned to fear. Now we fight against anything that might change.

“We fight about power lines, sewage plants, smart meters, water pipes, running tracks, dog parks, bridges, trails, rehab centres, the arts, the mill, burn piles, and the colour of our neighbour’s house. We want things to stay the same. Well I’m sorry –” (here the soapboxes swayed dangerously, and the crowd gasped) “I’m sorry, but I don’t remember how it used to be. I just know that things could be better. I think all of us should trust each other a little more. I think all of us should admit that our wardens are working night and day on our behalf, and deserve a little respect. I think we should not be afraid to grow, as a community.

“It’s fine to argue about things, but at some point we have to stop arguing and do something. Let’s be positive this time. I know it’s hard, but just… try.”

A silence followed this speech, broken only by creaking of the soapboxes and the cry of the gulls wheeling far overhead.

A warden cleared his throat. “You speak pretty smart for a little guy. Are you sure you’re not reading from a script, maybe some sort of blog?”

“No sir,” said the boy. “Blogs rot your brain, pretty much. I got my smarts honestly, one book at a time. From my public library.”

At this, a sort of cheer went up from the crowd. The wardens looked out, over the sea of smiling, frowning faces. They looked back at the empty site, sitting there like paper waiting for an author’s pen. And in that moment, they decided…

Will Powell get its new library, or is it all a hopeless fairy tale? Will we move forward and build something great, or will this process dragon and on forever? Find out next time, or the time after next. Or the time immediately following that time. Maybe.

Or, if you’d like to Choose Your Own Adventure, you can help shape this narrative now. Email your mayor, council, and newspaper with your thoughts. Tell your friends, tell your kids. Once in a while, dreams can come true.

16 thoughts on “A Library Tale”